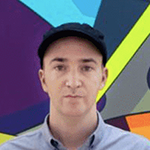 All of our Kaws works are new, with original packaging and with a holographic certificate of authenticity.

From streets to galleries, from provincial graffiti artist to genius of art, fashion and design. Kaws, born Brian Donnelly born in New Jersey in 1974, is the artist who with his Companion, the iconic resin figurines inspired a little by Mickey Mouse and a little by a skull, i Chum, a colorful and collectible version of the Michelin Man bridged the gap between commercial and contemporary art.

His creations are a bit of works of art and a bit of collectible luxury toys and, not for nothing, they appeal to an audience that, to use the term of the old board games, ranges from 9 to 99 years.

His story begins in Manhattan in the nineties where, unlike his "colleagues" Keith Haring is Jean-Michel Basquiat, Kaws does not act directly on the billboards but develops his own method: he steals them (only the fashionable ones), takes them to the studio and fills them with skeletons and bones, which become his distinctive motifs. Then he returns them to the world, hanging them back exactly in their place.

On the strength of his great success, he travels, expanding his research and his work, to Paris, London and Berlin. The arrival in Tokyo, at the end of the millennium, has the flavor of enlightenment. Struck by the collectible games, manga and obsessions of the Japanese people, he conceives the first ones Companion. Less than twenty years later, in 2013, a wooden version of Companion who covers his eyes, will go to auction for 1.64 million euros.

And why can a toy be worth so much? Because Companion is not just a toy, but a bittersweet lucid analysis of the state of our society. If its shape is reminiscent of Mickey Mouse, projecting us into the happy and joyful world of comics, the eyes wide open by the crosses convey a sense of restlessness and transience. Reassuring because linked to the universe of cartoons and, at the same time, fragile and melancholy. Kaws paints our society, polarized between loneliness and hyper-connection, amplified by social networks.

As of March 2019 Companion has become a 37-meter installation, a floating sculpture nestled in the Hong Kong harbor. A giant mouse that relaxes in the water, inviting stressed citizens, and tourists, to stop for a moment to relax.

Equally famous is there Chum, the friend everyone would like, a sculpture inspired by the Michelin man. Made in the most disparate materials, resin, wood, bronze and fiberglass, Chum is also the protagonist of many paintings that are delivered packaged in packages commissioned to toy factories.

Kaws is contested by the fashion world. In his curriculum there are collaborations with Nike, Supreme and Dior. For the French fashion house he reworked the logo and created a huge sculpture inspired by Christian Dior and his faithful dog Bobby. Uniqlo, the super trendy low-cost Japanese brand wanted it for a capsule collection that, at the presentation, generated apocalyptic scenes in the crowd queuing to grab something.

The world of music is also not indifferent to him. Self Pharell Williams he commissioned him to design the bottle of his perfume Girl, Kanye West he chose it to design the cover of his album.

His numbers are truly record-breaking. In 2019, from Sotheby's Honk Kong, Album, a painting depicting all the protagonists of the Simpsons saga with cross eyes, was sold for 14.7 million dollars, starting from a base of 700,000.

A colorful version of Chum was sold for over 2 million from Sotheby's New York while Clean Slate, the Companion along with two mini-companions, a sculpture representing the next stage in the life of the adorable sad little mouse, was beaten to 1,650,000 in 2018 by Philips Plaza in New York. And these are just some of the many six-zero results that make him one of the most popular artists in the world.

His sculptures are sold out even before being put on the market and the waiting lists are getting longer and longer. There are those who adore it, and those who just do not tolerate it but it is undeniable that Kaws has radically changed the world of art, bringing even young and very young people and non-professionals closer to museums and galleries. And, regardless of any belief, this is a merit that only great artists can boast.