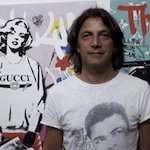 Tommy de Falco is an Italian artist, born in Naples in 1965, and notably known for portraying and celebrating our society. In his deeply layered and textured artworks, icons, status symbols and heroes, from the ‘60S to our times, are staged in a powerful explosion of colours.

Hollywood divas, fashion must haves and characters from cartoons and comics are definitely his favourite subjects.

Apparently very easy to be digested – after all who doesn’t know and love Gucci’s last creation or Marylin’s unforgettable face? – his paintings actually treasure a clever, amusing and fine texture of relations that bind their compositional elements.

At the end what’s the link between a Gucci dressed Marylin, a Chanel Number Five bottle bobbing against an urban graffitied wall with a proudly standing out Xanax inscription?

And what’s the connection between Barbie and a Trump graffiti word deleted by Ken’s one, both pasted onto a Rauschenberg style American Flag and Louis Vuitton’s logo? Is it just a fashion issue or some burning whispering about Europe and US relations?

Tommy de Falco asks his public to be briskly involved in decoding the artworks meaning, like they were some sort of rebus The paintings get their mean, and sense, from the observer’s interpretation, retrieving one of art’s most important duty: people’s engagement.

The artist, whose talent and technique in making collages matches the great masters, creates each painting layering magazine clippers and reworking them with stencil, inks, fluorescent paints and spray. Before framing, he applies a last free-hand layer of paint. It goes without saying that Tommy de Falco never did the same artwork twice. Even if he wanted – and sure enough he never has – it wouldn’t be possible.

Born in love with drawing and painting, the artist had a formal art education after which he stared his career as art director of very famous brand and strategist agencies but, eventually, he quitted to become a full-time painter. In his first series, he portrayed old car parked in salvage yard on burnt and ripped canvas that, through the application of raw materials as jute, paper or rusted casts, looked very worn.

After having painted female’s bodies and landscapes in a dreamlike and introspective way, he fell in love with POP, giving birth to Social Vanity, the series that has made him famous.

Exhibited around the world, and represented by international Galleries, buying Tommy de Falco is a great deal. Prices, still moderate, are surely going to get higher.