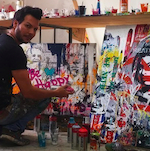 His hipster neighbourhood, Florentine- a lively area dotted with designers, fashion designers, niche boutiques and street-artists, imbued him, and his art, with a wow factor that collectors love. Florentine imprinted on the artist's DNA, giving life to paintings where characters and iconic objects float in a shower of colors and materials, with exquisitely tactile results.

Yuvi’s characters, icons of our era such as superheroes, scientists, movie stars, animals, fashion brands’ logos, float in a shower of colours and materials that flow in an exquisite tactile feeling.

The artist’s voice, deeply humoured and gently contemptuous, stand out from his paintings supporting social causes and topics that are important to him. Social criticism and celebration of our time’s icons and myths coexist, united by his unique and recognizable style where many critics recognize Mr. Brainwash’s genius.

Yuvi is a citizen of the world, born in a land of contrast that he left after graduating in Graphics and Design. Carrying just a backpack, a Reflex and his sketchbook, he left to discover Europe in a modern version of “The Grand Tour”, after which he settled down for a while in the USA. Grabbed by Andy Warhol’s legacy and Pop Art’s echo, he become a committed artist.

However, Yuvi, he is a child of the world. Of a land of contrasts that, after graduating in graphics and design, he leaves to discover Europe. Backpack on your shoulder, camera and a notebook to take notes and sketches. After the "grand tour" he settled in the United States and remained fascinated, like many greats before him, by the legacy of Andy Warhol and of Pop art.

Yuvi calls himself a pop art artist inspired by graffiti art. He usually paints with his hands and fingers, in a truly spiritual and physical relation with art.

His paintings are textural and highly tactile, and they seem to ask the observer to be touched and to dive in, like someone who’s going to spend the craziest night of his life around Tel Aviv’s streets.

Beautiful fair, thank you for welcoming me like that! Very punctual in personalized delivery 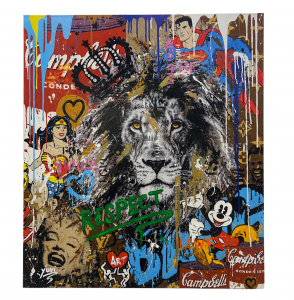