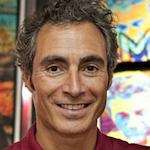 Patrick Rubinstein, the Optical artist that doubles his paintings’ subjects, making them move. His art comes directly from his trunk of memories and from our culture’s collective memory.

The art of Patrick Rubinstein it is a splendid journey through the centuries, through different eras and cultures, each with their own fashions, their own idols and manias, which come back to life and move thanks to the power of kinetic art.

His artworks are crafted according to optical art’s principles mixing them with his beloved passions: cinema, music and fashion. Optical Art is an artistic current born in the 60’s thanks to genius and visionary artists such as Vassalery or Yacov Agam.

Patrick Rubinstein, like a skilled director, he manages to give life to works that, based on perspective and light, generate different images in the same painting. In fact, his works are divided into double is triple depending on whether they incorporate two or three images.

Standing in front of one of his works is a purely magic experience. What we see looking at head-on the artwork is different from what we see moving right and left around it. This amazing optical effect gets even richer in the double paintings where the two distinct subjects blow up in a kaleidoscope of more imagines created by stepping from the one to the other.

However, the power of Patrick Rubinstein it does not end in technical virtuosity. Or in the precious materials used that, especially in the Excpetion, his latest series, bring to life elegant golden butterflies flying against Klein blue backgrounds and a universe more inspired by the world of nature.

In the end, his paintings’ magnitude is made, also, by his personal story, by his message and, above all, by the successful effort to give something to humanity through art. Patrick Rubinstein’s start with his own memories, strongly influenced by his mother’s love for cinema and by his father’s optical art’s obsession. His father was the one which taught him the basics of kinetic playing with old and dusty family pictures.

Yes, because, after all, the principle is simple. If we take a photograph and fold it into many small parts we will see that, with the light and changing point of view, it will multiply into different images. What really makes the difference in the works of Patrick Rubinstein it is the artist himself, his path and his research.

The artist sold the first painting when he was eighteen and he spent the following thirty years until his 2008 international debut, refining his technique. Studying, trying and trying again. During those preparatory years he worked for his family business and he launched a clothing line that, in the coming years, would have influenced his art by the use of glitter, by his subjects’ fashionable shots and by a range of colours that remind of a fashion show. His father’s death was the trigger of the decision to become a fully committed artist. It was 2006 and, just few years later, in 2013, Patrick Rubistein was ranked among the 100 best French artists.

His artworks speak about his passions, our passion and they bring back to life, right here right now, all the things that have thrilled and excited us: the Beatles, the English flag, Amy Winehouse and her most famous but even the art history’s masterpieces of Leonardo Da Vinci, Klimt, Maigritte and Van Gogh.

In Patrick Rubistein’s paintings there’s a very thin boundary between the Sacred and the Profane and, after the Masters, Marylin Monroe, Brigitte Bardot and the Great Hollywood Divas are back onstage together with the most loved Tv characters as Spiderman and Betty Boop

What Patrick Rubinstein ago is extraordinary, it brings back to life, and makes our memories move in a hymn to life, creativity, eternal historical courses and recourses.

Partick Rubinstein’s artworks are treasured in the world’s most prestigious collections, his whole series Music Madness was bought by Athens Contemporary Art Museum in 2014. His worldwide personal exhibitions are uncountable.

In addition to the art market destined paintings, today Patrick Rubinstein is aiming at creating big, monumental site-specific installations to be seen by everyone. Huge optical works thought and projected to make people smile thinking about their best memories.

Innovative, capable, available, creative. His works are an excellent investment. His works make my home unique.