The scene in the work portrays a team of policemen on motorbikes escorting a freight truck with a huge chocolate donut on top. It can be deduced that the artist wanted to give even more prominence to the donut by giving it color. The meaning of Donuts Chocolate is to create a satire against the policemen who protect with the utmost sacredness what is most dear to them. 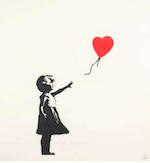 Who is really Banksy? His artist-mate Mr. Brainwash whose super-famous documentary Exit Through The Gift Shop was directed by Banksy himself or Massive Attack’s frontman Robert del Naya? The singer is touted to be the anonymous artist due to the suspiciously frequent appearance of brand-new murals during every band’s concerts. Like saying when Robert Del Naja is around, there’s always a new Banksy popping up nearby.

Another candidate, revealed by Queen Mary University’s researchers, is Robin Cunningham, who has been found out by “geographic profiling” also used to trace seral killers.

In the end, however, Banksy is Banksy, and he has proved to the art-system that is possible to be famous despite being anonymous. A really famous anonymity that, by the way, is worldwide known such as Monna Lisa, Vitruvian Man and Monet’s water lillies that, for the record, have been remade by Banksy in an urban- and uncivilized- version with shopping trolleys and garbage floating among them.

Instantly recognizable and comprehensible, they remind the opulent western world of all those social, ethical and moral issues we often turn our faces away- wars, poverty, AIDS, crocked politicians and pollution. Like it happens in Sweep it Under the Carpet, an artwork portraying a uniformed cleaner sweeping thing under a wall that she manages to lift as it were curtains.

Few times, some of his masterpieces have been intentionally erased to preserve cities’ decorum as it happened, for example, with Pulp Fiction a mural graffiti staging Samuel L. Jackson and John Travolta holding bananas instead of guns. The urban, hundreds of thousands of pounds worth, fresco which was decorating Old Street Underground Station, was washed away by diligent street cleaners which didn’t’ recognise the great artist’s touch.

Banksy uses stencils, a technique loved by street artists for its quickness, where paints is sprayed around a papercraft that shapes the painting as if it was printed.

The original graffitis are then replied in signed and unsigned copies always sold out before hitting the market. When is the wall painting itself to be sold, or auctioned, a crew of professionals carefully remove the painting from the wall, transferring it to canvas.

Undisputed genius of installations, in 2015 he took over an abandoned seaside resort, converting it into Dismaland, a creepy and scary version of Disneyland projected to shock children and family with Cinderlla killed in a car accident and surrounded by greedy paparazzies or Little Mermaid disfigured by contaminated sea.

Even before NFT coming and art dematerialization, Banksy teared apart one of his Balloons Girl just after it was auction at Sotheby’s for 1.4 million pounds. The action, made by a hidden remote-controlled shredder, was a protest against the art-system that, ironically, rocked sky-hights its value.

Few very lucky collectors managed to snap up his artworks for just five hundred pounds when the Gross Domestic Shop, a Croydon pop up shop build by Banksy overnight, put on sale his most famous screen-prints. Because the store was inaccessible, the buyers were raffled off from all the “customers” that registered online to run for buying on of them.

Secret exhibitions where visitors have been welcomed by painted elephants waking around like puddles or touching artworks like the Vietnamese girl running away from Naplan attack with her hands held by Ronald McDonald and Mickey Mouse – created by the same Americans that wiped out Vietnamese people – are just example of Banksy’s brilliance.

Banksy is a today Robin Hood who helps people without stealing and he created wall paintings to help immigrants and voluntary organizations thus protecting the most vulnerable people.

From what little we know about him, he was born in Bristol in 1974 and begun painting in Barton Hill youth centre. He moved to London in 2000 where he become Banksy.

Even if he has never been unmasked, he is one of the greatest contemporary artists.

Buying Banksy means to become part of the most important worldwide collectors with a zero-risk investment that, for those who dare to come apart from their beloved artwork, will be incredibly profitable. Banksy exists the PEST CONTROL, L'the only body authorized to authenticate.

Prices are subjected to custom clearance fees – 10% of the selling price- to be borne by buyers.

Beautiful fair, thank you for welcoming me like that! Very punctual in personalized delivery 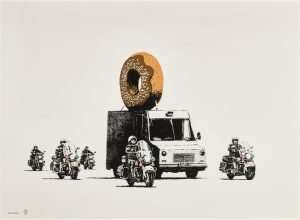