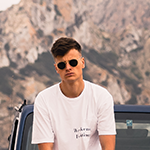 John Petschinger is a young Austrian artist, very fancy indeed, whose big paintings, finished with his signature dust of gold leaf, bring the observer straight into the glittering word of luxury.

Birkin by Hermès, bottles of Coca Cola (much more elegant than ordinary cans), magnums of Dom Perignon ready to be uncorked. The iconic Campbell Soup which, however, in the imagination of this precocious artist, becomes a Campbell Cash Sauce, in the name of the god of money thanks to which we can feed our most glamorous vices.

John Petschinger ‘s destiny for great things was written in the stars. Born in 1994, he became one of the most famous young Austrian actors when he was just six years old, riding the wave of success for four years. At the same time, thanks also to a good injection of family creativity, he began painting. His mother and his grandfather, that are both artists, unveiled him all secrets of brushes, paints and palettes.

After leaving Tv scene, John continued his studies. He graduated in tourist management and got a job in a luxury hotel. At that stage painting was more a hobby rather than a profession. He used to post on Instagram his creations until one of his painting’s post got viral. For the second time in his life success blessed him and, while his Instagram followers kept on increasing, his artistic career took off.

With first year’s sales he manages to leave his job, becoming a fulltime artist His artworks’ values boomed from few hundred euros to thousands while, collectors, began queuing to buy one of his paintings. One collector got his London penthouse entrance’s door widened just to allow a John Petschinger painting to be hung on his living’s walls

John Petschinger transforms his obsessions into art, transfiguring them into a divine and immortal stage. He’s a free spirt and he only paints what he likes, always with love. His favourite material is gold because, in addition to a shimmering effect, conceals a deep meaning. Gold makes us think, and invites us, to see beyond luxury’s golden patina looking for a true point of view. The gold leaf finishing touches, in fact, changes with the passing of time, the light and the perspective of the observer ending up in a completely subjective art. His paintings are often finished with flowers that represent the ideal of beauty. Portraying pop icons in different styles aims to make people change their opinion and view about them.

For the artist, observing a painting is like looking in the mirror where feelings, emotions and meanings reflect who we are, what we believe in and what we love.

John Petschinger manages to deeply connect with his public, helping them to find out their view on fashion brands, and iconic goods and characters

In his studio canvas are banned. He creates on a few millimetres high metal base a, on which, like if he was playing with a puzzle, he arranges cuttings of very precious Taschen unique editions, resin, acrylic colours and, of course, the inevitable gold leaf

While waiting lists for one of his paintings are getting longer and longer, John Petschinger’s works demand is rocking all over the word. One piece of advice for those who intend to buy one of his paintings? Hurry before this golden boy’s prices become unreachable.