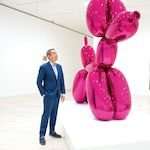 Jeffrey Koons, aka Jeff Koons, was born on January 21, 1955 in Pennsylvania. His parents, passionate about art, pushed him towards an artistic career that led to enrollment in the prestigious Chicago Art Institute, under the guidance of Ed Pasche, teacher and famous artist.

After graduating from the Art School of Baltimore, he arrives in New York where he is absorbed by the avant-garde and the climate of artistic revolution. and cultural. Fascinated by the works and personalities of Martin Kippenberger is Robert Smithson, he leaves the figurative to devote himself to abstract, conceptual and material painting.

1980 is the year of his consecration as an artist: The New, his installation exhibited in New York, drives audiences and critics alike crazy. The sculpture, made from vacuum cleaners transformed into a work of art, recovers the idea of the Duchampian ready-made, of Andy Warhol's factory and, in general, of the common object, even if it is quite poor, which becomes art.

Inspired, and motivated, he creates Puppy, the maxi-sculpture in the shape of a dog made up of 70,000 flowers. The work, 13 meters high, is a kaleidoscope of colors and scents that praise positive things: love, joy, loyalty and happiness.

The dog is gradually joined by the rabbit, the swan and the monkey. A zoo, declined and worked in the most disparate materials: paint, plastic, balloons, marble, iron, steel and porcelain.

The series of sculptures, called Celebration Sculptures, they are an evocation of childhood, of children's birthday parties and, in general, of the beauty of life. On a conceptual level, they represent the desire to create a democratic art, understandable to all and able to involve for its immediacy and simplicity.

Obviously, alongside the celebratory art, there is a subtle criticism of consumerism, of Western society obsessed with possession and money. The same company that made him a rich man with collectors willing to spend millions on one of his works.

Social criticism and joy coexist and, in the end, find a meeting point in an art that is the mirror, interpreter and daughter of our time. And to whom, like a lively and somewhat mischievous son, he forgives himself knowing that no one is better than him.

It goes without saying that Jeff Koons is one of the most famous, collected and loved living artists.