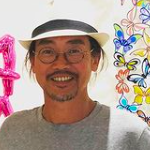 Kojii Kasatani is a Japanese artist who, with his exquisitely realistic sculptures, brings the colors, shapes and emotions of everyday life into art.

His creations, light, fun and easy-going, manage to amaze us and make us observe the world through the eyes of the kawaii, the Japanese philosophy that everything is as tender and cute as in a manga comic.

This light-hearted allure, however, is the result of painstaking work and perfect manual skill capable of recreating, through a plastic use of ceramic and resin, every single detail, fold and nuance as nature made them.

A skill that, Kojii Kasatani, has refined at the Academy of Art in Florence, the city he moved to in 2007 at the age of forty-three, after leaving a “normal” job and career in Tokyo. The love for art, for painting and sculpture has accompanied him since he was a child, almost as if he knew that, sooner or later, he would become a real artist.

During the Italian period, Kasatani also deepens the ceramic processing and begins to create the first sculptures inspired by everyday things: cardboard boxes, used shoes, hamburgers that recall the workshop of Claes Oldenburg and the dawn of the pop experience in the sixties.

Upon returning to Japan in 2010, he was struck by the idea of ceramic banana sculptures that recreate heads, objects and shapes, made from banana peels, in different stages of ripeness. From the fresh, iridescent yellow ones, up to those made dark by the passage of time.

Alongside ceramics, he begins to experiment with other materials, discovering, and falling in love with, resin, a material even more suitable for perfectly realistic sculptures.

This is how i bubble wrap, sculpture-paintings depicting canvases wrapped in bubble wrap which, thanks to the use of resin, is recreated in all its three-dimensional materiality. The bubble wrap protection lets you glimpse what's underneath: winking images, hearts and writings praising love.

“Bubble wrap is a material used to store precious objects. Well for once I wanted him to be the object of value, thus subverting every logic we are used to and transforming it into art. The transparency of the resin allowed me to play with the light ”he explains.

In this way, the spectator is dragged into a round of hide and seek, under the banner of see-through and see again. The image in the background, in fact, is revealed only to those who find the perfect position: front, not too close and in the right light. It takes some effort but, in the end, what emerges from the resin is art, combined with a very profound revelation.

For Kojii Kasataniin fact, art is everywhere, it exists in every corner of the world, in every form of life because, in the end, art itself is life. You just need to recognize it and, of course, appreciate it.

With the delicacy, grace and spirituality that characterize the Japanese culture, Kojii Kasatani manages to amaze us, to make us smile and, finally, to make us reflect on the importance of small things.

The still low prices and the great interest on the part of the whole art-system, which is constantly growing thanks to personal exhibitions all over the world, make him an artist to invest in.