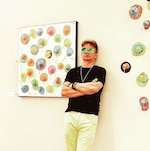 Paul Thierry, extraordinary German pop artist, he has attracted the attention of the public and critics for his paintings which, thanks to an avant-garde reinterpretation of the monotype print, explode in a fury of three-dimensionality and color.

The Pop subjects depicted, Hollywood divas, singers, Disney characters is extra-luxury fashion icons, emerge in all their fullness from purely street-style backgrounds. A composite universe of graffiti that creates a disarming, but pleasant, contrast with the whiteness, cheerfulness and lightness of pop icons.

The creative process is long and laborious. Monotype printing, an ancient and very refined technique, is only the starting point for Paul Thierry who, first, paints and prints his creations on a glass or plexiglass surface. Each mold is unique and is used for a single painting which inevitably makes each artist's work unique and unrepeatable.

Finally, it works by freehand painting the final touches, such as background graffiti, rather than writing or decorative motifs. During the assembly phase, and here is the master stroke, the artist often assembles the glass leaving a few centimeters away from the canvas. In doing so, light and space transform the two dimensions, glass and canvas, into a third three-dimensional surface, alive and in motion.

It goes without saying that his very personal and inimitable tribute to Pop culture is in great demand all over the world. The paintings of Paul Thierry they are kept in prestigious collections, public institutions and museums.

Berlin, one of his most iconic works, was purchased by the German government and exhibited in the most important German and Dubai museums.

It goes without saying that he is certainly an artist to focus on, destined to achieve fame, prestige and interesting prices.