Elvis Art in Not a Crime 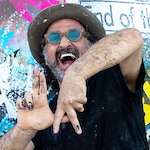 Brainwash, the optimistic street artist who with his children in love and iconic characters immersed in kaleidoscopic colors tells us about the beauty of life and invites us to chase our dreams.

Brainwash, aka Thierry Guetta, is the bad boy with a tender soul who, with his works praising the Love is in the Air, to the Follow your Dreams and al Love is the Answer, just to name a few, he has bewitched and made the art world fall in love (or tremendously angry, with him there are no half measures).

Born in France in 1966, he moved to Los Angeles in his teens and, right in the land of possibilities, he is drawn to street art by his rich in hope and prospect destiny.

He began working as a video maker with his cousin, the street artist Space Invader, following him during the night and documenting his art, his secrets in the background of a never-sleeping town floodlit by the bright signboards of Starbucks, Mc Donald and all the other logos.

His job built a huge buzz due to which he started working with bigger players like Banksy with whom he seems to be bound by a special fate. And indeed, Mr. Brainwash often quotes Banksy in his paintings.

Just Banksy, while they are working on Exit Through the Gift Shop, the docufilm on Brainwash, which in an ironic role reversal will then be directed by Banksy himself, suggests that he change his job to devote himself to art.

Brainwash it does, in a big way. Investing everything he has and mortgaging the house in which his wife and children lived together with him, he organizes a solo show of unique proportions: Life is Beautiful. Inaugurated on June 18, 2008, it will close with a turnover of 1 million dollars. Opening him the doors of the Olympus of the artists who matter.

Success and fame strengthened his voice and his belief that art has to convey love, joy and good vibes. Especially love, above them all, is seen by the artist as the only and possible solution to every problem as well as the deeper life’s meaning.

In a recent interview, he told about a revealing event that happen when he was still a street artist. A couple of lovers, questioning whether getting married or not, were inspired to tie the knot by one of his love’s graffiti.

Mr. Brainwash’s artworks celebrate the courage to purchase our dreams, and who better than him can set an example, and they boost us to keep in touch with our childish and untouched side.

He portrays Mickey Mouse and Minnie together with loving children dressed up like Beatrix Potter’s bunnies, while Charlie Chaplin and Einstein’s lives are seen and staged as a never-ending inspiration’s source.

Brainwash, after all, it tells the company, with its iconic symbols and characters, in a genuinely positive vision that can be summarized by the omnipresent life is beautiful.

It’s precisely because life is beautiful that, his unique pieces’ characters float in a kaleidoscope of colours made by collage, tempera and spray.

Thierry Guetta is still an at heart street artist and he paints wherever it happens, from canvas to rough paper, plywood, cardboard and recycled materials

All Mr. Brainwash’s painting come in with an originally handmade authenticity certificate which looks like an artwork inside the artwork: a burned cardboard completed with half of a dollar note whose second half is safely kept in the artist archive.

It goes without saying that his prices are getting higher and higher. His screen prints, always sold out before hitting the market, soared up to 6000 euros.

Unique pieces range from ten thousand euros to hundred of thousands while all the experts are sure enough that they will reach six figures in no time.

Why basically life is beautiful and success, as it teaches us Brainwash, it belongs to those who have the courage to believe in it.