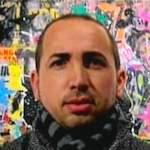 Massimo Chiti is a Tuscan artist who, starting from the legacy of Andy Warhol is Mimmo Rotella, gives life to a new era of pop art, creating colorful paintings starring the iconic characters of cinema, TV and our cultural background.

Strong from his training, he graduated from the art school with specialization in metals and goldsmith, Massimo Chiti retrieves proven techniques such as collage, decollage is affiches and blends them with innovative materials such as resin, diamond dust, glitter and silver leaf.

Although the result is absolutely glamorous and sparkling, there is more besides aesthetics, however fundamental. The artist, in fact, acts moved by the desire to recover and tell our most recent story and use it to create new paradigms suitable for interpreting the present and the future.

Its ultimate goal is to develop, in the public, new hypertextual mental links, connections and inferences with which to approach the present and the future, illuminated by the icons of cinema and TV which, like the ancient masters, show us the safest way.

Thanks to the use of resin, in fact, Marylin, Sophia Loren but also the Pope, Mickey Mouse is Maradona they are broken down and reassembled into something new that looks ahead without forgetting what has been.

Metaphorically and physically, materials such as resin they give the paintings an aura of immortality which, if on the one hand it makes us reflect on the finitude of the whole, on the other it finds a way of salvation in history and in the mythical consecration of our favorites.

For Massimo Chiti making art cannot be separated from manual work. Like Rotella, he is a poster hunter who goes to look for the streets of his beloved Pistoia, the city where he was born in 1979. Once in the studio he literally tears them apart and places them side by side, joins, overlaps with pieces of old films (reprinted) rather than photographs. Once the image is obtained, it works with resins, paints and glitter.

The result is highly material works, sometimes three-dimensional, which impose themselves without asking for permission. Each work has its own wooden frame that Massimo, in love with this versatile material, creates with the same love with which a father adjusts his son's jacket at the school entrance.

His debut took place in the homeland of Pop-Art, the United States, where he was received with great fervor. Europe and Italy were no less and, if in 2019 he exhibited in Amsterdam, in Italy he conquered Arte Padova.

In addition to subjects dear to him, he also creates works on commission to allow anyone who wishes to transform their myth and, consequently, their interiority into art.

Because, after all, what we adore tells about our dreams, our desires and aspirations for a future that, thanks to the teaching of the past, is clearer and easier and within reach.