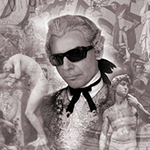 Marco Battaglini’s ArtPopClassic breaks any logic relation between space and time, mixing past and present in order to get people free from prejudices and strict mindsets.

Marco Battaglini vibrant, energetic and colourful artworks piece together, like a cheeky time machine, past and present, creating a messed, but controlled, environment ruled by subjects, places and icons coming from different eras.

His art is a front row-seating trip through the artworld and the history of art where space/time’s order is overthrown in a surrealist way that amuses and surprises the public. Looking at a renaissance artist at work in his frilly atelier portraying a Roy Lichtenstein’s woman or an Andy Warhol Marylin is just all right in Battaglini’s artworks.

Marco Battaglini addresses to our society, asking and suggesting that we should observe the world from a different point of view. He strongly believes that art is the way to break prejudices and preconceptions, allowing people to live a never-ending creative freedom.

In order to get this new perspective, the artist left Italy after the Art Academy and he moves to South America, looking for the sun, the stunning Caribbean colours and for new points of view. While his diploma taught him history of art and the ability to copy the Master, South America taught him that changing country is the best way to plunge into another mindset.

This epiphany led Marco Battaglini to ArtPopClassic, more an artistic movement that a series, where art takes on the duty to demolish prejudices and stale mindsets aiming to a renewed freedom. ArtPopClassic’s painting steal ephebic young with perfectly shaped body from Tiziano’s, Guido Reni’s and many other Masters’ artworks carrying them in our suburbs, covering them with tattoos, dressing them with tight Calvin Klein pants. Their slender fingers that used to point at heaven, are now pointing at graffiti, grabbing a lollypop firmly.

Through those contrasts the artist manage to paint a dialogue, and a match, between past and present but also between elegance and vulgarity, wealth and poverty, beautiful and ugly. The opposite couple are heightened by slogans that seem to come from one train station wall or from a rebel teenager’s diary: Make love not war, Gentleman prefer Blondes. Battaglini combines art with music, with cartoons, with book industry and many other mainstays of our world.

The artist, a self-confess surrealist, quotes Duchamp and his belief that ideas make more ideas, new dimensions, new mindsets and, at the end, new worlds. However, hidden by the humour and the amused reaction caused by his paintings, there’s a strong criticism against society. Battaglini reproaches humans for being incongruous and for living in parallel blocks unable to talk each other. Stuck in their own little world, and mindset, people are constantly under the attack of a multitude of information that none is capable of processing and understanding because they are too much.

In this complicated framework, art takes on the role of making people to wonder and question about their lives. Art doesn’t give answers but help people become aware of the existence of other worlds, other mindsets.

Thanks to the shock caused by the space/time mix and match, the public realized that prejudices and stereotypes changes quickly from one generation to another. They change the moment we step on a plane headed to a remote country. Prejudices and stereotypes, in the end, are just sandy prisons which to get out from we just have to blow and breathe.

They say that beauty will save the world but, in Marco Battaglini’s paintings, art will save the world. And it doesn’t matter if, in his fight against demons, Gabriel, the angel, wears a Superman t-shirt. He has the right body to do it.