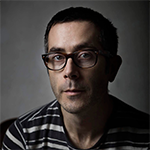 Among the contemporary upcoming artists, Lino Lago (Madrid, 1973), is without any doubts one of the most interesting. Fake Abstract, his last series of oil on canvas portraying classic subjects covered by a layer of monochrome paint, had a huge success in Milano, Paris, New York, Singapore, Shanghai and in the coolest art capital while the prices for his works keep on increasing.

Collectors, art dealers and gallery owners fell in love with Lino Lago’s cheeky and elegant humour that has been compared with Magritte. The Spanish artist, which blames his colleagues ‘attitude to behave like shamans vested by God (that’s why Fake Abstract), makes a sincere effort to overcome the gap between classic and contemporary art, in order to achieve a happy and funny coexistence.

The scheme of Fake Abstract is quite simple and straightforward. The subjects, classic and renaissance human figures, are covered by a thick layer of monochrome paint from which they stand out in tiny glimpses. Those glimpses look like the result of someone scratching off the monochrome paint or the precise action of an eraser that deletes the new to show the old underneath

The public is intrigued and amused by the question if the subject behind the layer of paint is wholly finished or if the glimpses coming from the past are just made to surprise. The problem, or the funny aspect, is that the only way to discover the truth, would be to scratch off all the monochrome paint, destroying the artwork. The same situation as Manzoni’s famous cans and many other famous artworks. The truth without harming the artwork isn’t an available option.

In the end, the result is the ability to go behind the gap between abstract and figurative art, classic and contemporary art in order to achieve a universal art where the real star is the artworks itself and the message that it leads. The artwork must amuse, must make people reflect and be pleasing to the eye. Lino Lago gives up any omnipotence claims to play merrily with his public.

Despite his reclusive nature (in a recent interview Lino Lago revealed that he barely leaves his home-study and that he prefers working rather than going out), the artist won over the art system and the design world as well. He took part in renowned international Art Fairs, like Arco, Art Miami and Shanghai SH Contemporary.

His exhibited in international art spaces like Casa de Galicia in Madrid, the Flint Institute of Michigan and the Adams Gallery in New York. The hippiest magazines wrote about him: Vogue Italia and The New York Times Magazine. Architectural Digest featured many articles about homes decorated with his artworks that have the natural skill to empower and highlight each place where they are displayed

If the series Fake Abstract made him famous, the previous ones are really interesting too. In Paint over Paint, Lino Lago, after having depicted perfect copies of Da Vinci, Velasquez, Bronzino and Ingres famous masterpieces, overgrows them with fresh paint and graffiti. In the Attack Series, elegant and bourgeois interiors, and galleries, are covered with fresh paint thrown with energy. In Commented Paintings, classic paintings are completed with provocative and irreverent words.