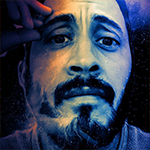 José Porto, aka Josh Mahaby, was born in Cordoba in 1982. In love with images and colors, he studied advertising graphics and design and, after his debut in a well-known advertising agency in his city, he moved to Alicante to become a designer.

In Spain he began to make art, immediately achieving great success among private collectors and important names in fashion.

Three of his works are in the private collection of the Gucci family. Some of his works have been auctioned together with works by Bansky is Kaws.

His multifaceted paintings combine different techniques, from the most classic such as acrylic painting, illustration and collage, to digital art, image manipulation and 3D.

The subjects range from his passions: fashion, rock music and Pop icons of our culture in a fusion between neo-Pop and graphic design.