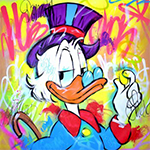 Ivan Rubio he is a carefree, cheerful and optimistic artist and with his works, an explosive mix of pop culture, classic art and street art, he tells and celebrates the beauties of the world.

His philosophy of life - no drama, enjoying the sun, the sea and always being in a good mood - influences his paintings which always manage to make the viewer smile.

Be careful not to fall into easy clichés: his lightness is far from any form of emptiness and his works reveal a deep knowledge of the history of art, techniques and an incessant research.

Ivan Rubio he is inspired by Roy Lichtenstein, Andy Warhol, Basquiat, Mel Ramos and Keith Haring as regards the graphitic style while from Dalì and Sorolla he learned the ability to modulate light.

Miguel Ángel, Velázquez, Goya, Murillo, Rembrandt and Johannes Vermeer influenced him in the compositional clarity of his characters that stand out on the canvas with the same clarity of the masterpieces kept in museums.

In her works, icons of the history of art - the shepherdess, the girl with a pearl earring, Neptune and the Virgin dress in Pop: designer accessories, Perrier bottles, cartoon icons such as Uncle Scrooge and the Pink Panther share the same scenes in a fun chaos that brings the beauty of different eras and artists to the stage.

Born in the beautiful Alicante - Ivan Rubio demonstrates great artistic skills since childhood. In fact, the director of his high school had one of his works hanging in the office.

Brave and enterprising, he began to self-promote on social networks, to the point of being noticed by numerous galleries that now represent him.

With affordable prices, buy Ivan Rubio it means betting on a young talented and enterprising choice who, as the history of the art system teaches, pays and also very well.