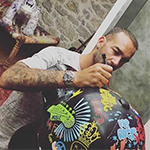 Fourth generation of a family of very well renowned stonemasons, Frederic Avella was born in France in 1975. He spent his childhood in his father's atelier where, even if he was barely able to walk, he could identify different kind of stones.

At twelve years old, Fred was carving like an expert stonemason. Due to his early talent, just after his diploma, he was commissioned the full requalification of one pretty French Rivera town’s promenade. For the occasion he performed a series of statues and fountains inspired to Belle Epoque style.

Freud, his first series, shapes animals such as Bulldog and Gorilla, deliberately exaggerating their physical characteristics in an ironical and funny version. The result is a zoo where, if from one side, animals seem to have come out from children’s drawings, on the other hand they investigate human vices and mania through a sociological eye

Fred Avella’ s massive sculptures speak about the meaning that animals take on in our culture, especially in fashion industry and sports word where they are picked as logos and mascots.

His Gorillas, all looks and no brain, and his Bulldogs, all barks and no bites, along with comic characters, Hollywood stars and stereotypes everyday objects give birth to a joyful and shrewd world

Fred Avella finishes his sculptures with shiny and sparkling varnishes that give them a delightful collectable toy look that make people happy.