LAST OF THE SERIES 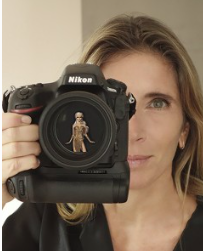 Cécile Plaisance is a French photographer, famous for optical photos where the subjects get literally naked. Her Barbies and her stunning models take their clothes and holy vests off, showing off their sculptural bodies, often caught in sensual and tastefully spicy moments.

Her photographs change according to the observation point and move like on a screen, giving birth to a dynamic art that necessarily grabs the public’s attention.

Her subjects, nuns, Ice Queens, Popess, tsarinas, women in burkas, and posh fashion victims wearing Chanel from head to toe, give birth to a feminine creative world that celebrate beauty and life’s pleasures.

The act of undressing turns into a sacred ritual representing all the things’ inherent beauty that must be looked for. In Cécile Plaisance’s works being alive and being in the world is a miracle that she celebrates through and with photography, the best artistic medium to catch and to be part of the perfection that surrounds us.

Along with the celebratory intent, the artist conveys a stated social message, a strong and loud critic against everything that stifle women’s freedom and rights. She also blames the assumption that there’s one religion above the others. Equal faiths and no more restricted-women are the pillars of her photos where, indeed, women are free to glow, to be sexy, to be loved and to be happy.

Equal faiths and no more restricted-women are the pillars of her photos where, indeed, women are free to glow, to be sexy, to be loved and to be happy.

Cécile Plaisance was born in France in 1968 where she got a prestigious Business degree. After few brilliant years working in Finance, she quitted everything to explore the world with her husband. A life changing travel through countries, cultures and people well documented by her ever-present and beloved camera. After wondering around Europe, they settled in Usa for two years during which Cècile realized she was ready to become a committed artist. t.

Barbie’s series was immediately a huge success, contended by gallerists, collectors and curators. The next real -model series is the natural continuance of an artistic and personal journey where the human being is the centre and the destination of her research.

The latest works has enriched Cècile’s humanistic and hedonistic philosophy with a very felt green commitment to save the beauty of the world where we are lucky to live. A never-ending source of positive energy, inspiration and magic.