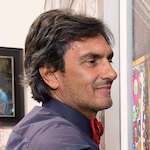 Angelo Accardi, a fine and introspective Italian artist born in Sapri in 1964, draws inspiration from the history of art and from the places, both urban and domestic, inhabited by humankind. His vibrant paintings take a great pleasure from space-time overthrows that strike the public’s emotions and requires a good thought, at least, just to find out the heart of the matter.

In his artworks, planes falling out from the sky and ships torn from the sea that invade stunning and desert, akin the Chirico’s ones, Italian Squares, are just the ordinary. Like it was a catastrophic American movie.

In some paintings, humans and animal share the same luxurious rooms even if, and that’s the scary thing, whereas animals are well active, humans are sleeping or look like hallucinations.

Such space, time and logic subversion grab the observer’s attention, which has to stop and take some time trying to find out the artwork’s meaning. Angelo Accardi’s works ask for more than few minutes, or a quick selfie, to be understood, bringing up art’s most antique purpose: make people think.

At the same time, his artworks, create a deep and cathartic anxiety because they portray our fears. Ostriches, rhinos, pigs or characters from the Simpsons that invade and live human spaces – but also planes and ships thrown into our cities- embody everything and everyone threatening our world. The artist serves as a psychotherapist, a really good one, forcing his public to face their fears.

With values keeping on rocking – they literally double year by year- Angelo Accardi really succeeds in awaking people’s minds. He exhibited in the world most prestigious fairs- like Venice 54th Biennale – and he’s represented in the best international Art Galleries.

His beginnings were all about figurative art, taking inspiration from Giacometti and Francis Bacon. He took on Naples Fine Art Academy, but he quitted because it wasn’t the right environment for him. After a resulting deep artistic crisis that led him onto abstract art, he finally found out his mature style in the early nineties: studying and depicting human in a social-figurative and allegorical way.

Making his paintings is a long and well-thought-out process that starts with a real shot, subsequently edited with Photoshop to add animals, planes, or ships. The artist, then, copies the sketch, hand painting it on canvas in a very hyper-realistic way. The third step, the freer and wilder, is when Angelo Accardi put the last changes, just following his creativity.

Using and layering different paints – ranging from oils to inks- gives to his paintings’ subjects that shiny and textures thickness that reminds of some Flemish Masterpieces.

It goes without saying that Angelo Accardi artworks must be bought today because tomorrow the price may increase or, worse-case-scenario, could no longer be available. They are sold as the same speed as one of his (luckily metaphorical) plane crashes on a desert Italian square.